OK, I've been putting this off for a while, but maybe I can start by telling a little story. I like to visit a blog called  IMAO. The guy who started it, Frank J. Fleming, has also written some books. One of those books is a vicious piece of satire called Obama, The Greatest President in the History of Everything.

I bought the e-book version. Well, last Christmas season, his wife, the incomparable Sarah, "won Christmas" by ordering a special Christmas present for Frank. (Link) You'll have to look up Axe Cop yourself for the whole story behind that, but it's very funny.

Well heck, says I to myself, If Frank likes art, I can send him some of mine, so I e-mailed him, got a snail-mail address from him, and mailed him 2 of my designs.
Time passes, and he doesn't post my stuff on his website. I mentioned in the comments in another post at his site, just gripping a little bit in an off-handed way, understanding-the-why-makes-everything-more-beautiful but Lo and Behold, Harvey, another blogger at IMAO, responds and tells me that Frank probably just forgot and I should send the pictures to him and he'll make sure they get posted.
Well Frank had the originals, so I sent Harvey 2 new ones and thanked him for his interest.
Then the great day arrived! I had submitted links and ideas for posts in my comments or e-mails before, some of which they could use and for which I'd won High Praise!, 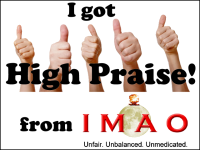 And Harvey, not to be outdone, posted the two I'd sent him on the same day.

Harvey, who knows about this sort of thing, posted a a small version, and a full sized version you can look at by clicking on the image. (I'll figure it out in time, but for now, on with the story).

Well, that went over so well, I decided to send them some more art. It was about this time that Harvey encouraged me to start a blog spot of my own to display my art, maybe even sell a few from time to time, so I went to Google and opened this site, but didn't do anything with it immediately.
During these email discussions, Harvey suggested I do a Bacon themed design. Well, I do abstract geometric designs, not still-lifes of food stuffs, but I figured I could do something that expressed the "idea' of Bacon, so I used the announcement of the birth of Frank and Sarah's second child as an excuse to send them the results of my efforts.

Is Art Powerful Enough To Express the Idea of Bacon?

The first two are Dial "B" for Bacon (or Baby), and The "Idea" of Bacon,   and a third for good measure. This post was where I was first referred to as IMAO's "resident artist" which tickled me no end.
﻿

This one I put in a little larger so you can maybe see the ninja stealth monkeys scattered through the design. (Note: later I went back and made them ALL larger, 'cause what the heck!)

Well, I felt like I was on a roll, but I felt a pang of guilt because I had so far neglected Basil, another fine blogger at IMAO. So far Frank had five pictures, Harvey had two, but Basil had none. I'd suggested to Frank that he might mail The "Idea" of Bacon to Harvey since he'd given me the inspiration for it in the first place, but that still left him ahead with four and Harvey with three.
So I decided to do a little voluntary "art redistribution". I resolved to send one more picture to Frank, two more to Harvey, and five all in one go to Basil. The five I sent to Basil were a series I created especially for this "fairness" exercise entitled "Fun With Cubes" 1 through 5. If Basil ever posts them, I'll be sure to link and display them here, but for now, here are the ones that got posted.


and to Harvey, The "Idea" of Beer, and Sea Shore ('cause you have to have some place nice to drink your beer!)

These two pictures got a lot of encouraging comments from the moon-nukers at IMAO. One fellow (Oppo) hailed me as Michelob-angelo or M.C. Timeshare! (Escher)
Another blogger over at a friendly website, Nuking Politics, Anonymiss, asked if I could do a picture that captures the essence of cookies (in pink). (Cookies are sort of her thing, like bacon is for Harvey). Harvey picks it up in the comments and says "the gauntlet has been thrown!" So I say "I accept the challenge!"
As it so happens , I'd been developing a new design element I called a zig-zag net. I bent this design into a circle, used 3 shades of pink and other colors compatible with baked goods and created The "Idea" of Cookies (with Pink icing). I sent it to Harvey, who scanned it and sent it to Anonymiss at Nuking Politics.
So here's a link to the post at IMAO, Cookies! Now available in art form! and link to the post at Nuking Politics, the idea of cookies.

And here is a copy of the picture itself.

I'm all gung-ho about this art blog thing now because a good friend at church knew I've been living paycheck to paycheck and haven't been able to save up enough to buy a scanner, so out of the blue he hands me $40! After church I head for Wal-Mart and buy a Canon scanner/copier/printer for $29 and USB cables for $15 and now Yay! I can scan stuff!
At least I will after I move some furniture around, get the scanner out of the box and figure out how to link it to my old Dell. But someday I'll have this website up and showing my work.
If you want to download the images you find here, go for it. But be kind and tell people where you found them. If you want to buy the originals, that can be arranged. (as soon as I figure it out. So much to learn, so much to learn...!)

Update: My old Dell died in early November, and I was off the net for two weeks. But my brother, Paul, hooked me up with a HP laptop, got all the wires in the back connected correctly and even got my new, still in the box scanner hooked in. (It's good to have a tech-geek in the family - especially one who's also a wiz at small-engine repair, carpentry and deer hunting. He can fix your lawn-mower, patch your roof, defrag your hard drive, and cook you a venison steak, all in the same afternoon!)