I've been drawing all my life - but I haven't saved all my work. So I can't show you the first picture I ever scrawled with a piece of chalk clenched in my pudgy little fist - but my mother will tell you it was "very good".
Inspired by that early encouragement, I kept on drawing until I got good enough to be amusing. I drew comic books utilizing those little pocket sized notebooks - one panel of the cartoon on each page. That was fun.
I did lampoons of Batman (Fatman and Slobber, the Boy Blunder), Superman (Stuperman), The Lone Ranger (The Lone Stranger), and Star Trek (Star Truckin'). I even did team-up stories. Fatman meets Stuperman, and The Lone Stranger meets Capt. Kwirk and Mr. Spick (a time travel story, of course).
When I got to college they paid me $5.00 cash money for each cartoon I drew that they ran in the student newspaper. For 3 years I did a strip called Star Truckin' (no offense meant to Paramount Studios or their copyright protected properties!) 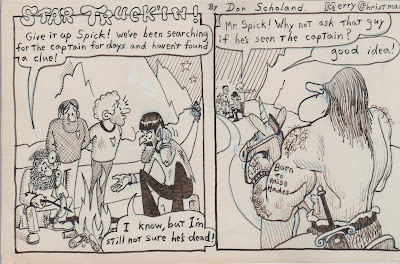 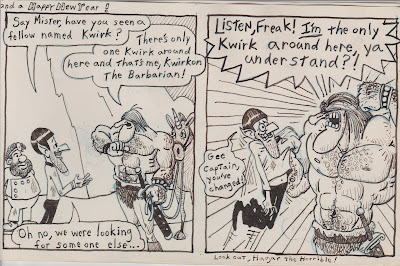 Star Trek meets Dungeons and Dragons meets Conan - God, I was Such a Geek!

I kept up the cartooning, in a small way on the side when I joined the Coast Guard, (Guard Trek, also known as The Adventures of Kevin Koastie) but I gradually grew more interested in abstract, geometric designs. Eventually, after I retired, I decided that I would try to sell some of my designs. That's when I learned two things.

1. It's hard to make a living drawing pictures - that's why I've kept my day job.
2. The more you work at it, the better you get.

To prove my point (point 2, that is), here's the oldest color drawing with geometric overtones that I could find in the closet where I keep the tattered ends of old projects, failed hobbies, and fresh linens.
And here's my latest, finished yesterday afternoon.

So, what do ya think? Have I made any progress, or should I give the Fatman and Slobber idea another chance?