Update: LOTD - Hallucinations Welcome.
Have you ever done something and didn't notice that you'd done it until after it was over? And then there's that Steve Urkel moment when you say, "Did I do that?" But sometimes it's a good thing? Yeah, that happens to me a lot!
So, here's an assortment of pictures I've done that all have a extra little 'something' that I didn't intend, but recognized after the picture was complete, and incorporated into the title as if, as Pee Wee Herman would say, "I meant to do that!", when honestly, it was more like, "Whoa! I did NOT see that coming!".
PS: If you don't see it, don't worry, it's not really there. In most of these, it's kind of like seeing shapes in clouds - a very individualistic imaginative pursuit. But most of them are pretty, so enjoy that at least.
Update 2/26/14: Here's one more I found in my file of drawings done on blue-lined graph paper.
(I also added some commentary and a highlight from the last picture.)

﻿ No one told me back then that great art just wasn't done on grid paper. Huh.


This next one needs a bit of explanation - "Darwin's Dilemma?" was intended as a pure abstract design; a random, semi-curved linked structure with a bottom-to-top color progression. But when I finished it, I saw, partially hidden in the structure, a sad, monkey-like creature looking out at me. I didn't plan to put it there, but by some confluence of random design elements, a recognizable form appeared. So my title, "Darwin's Dilemma" was my too-clever-by-half way of saying, "Hey! Look at the Monkey!"

Shooting from the Hip was actually drawn the other way around, but it didn't look like anything to me until I turned it upside down, then it jumped out at me.
(Top to Bottom plus Right to Left equals Pseudo-Dragon - That describes how I applied the colors. The head of the dragon is just above the center of the design.)

The next one is another Two-Fer but scary, so Watch Out! (Just shown once this time, because it's almost the same either way.)
I even drew a little portrait in the corner of this last one to help you see what I saw scattered throughout this design. 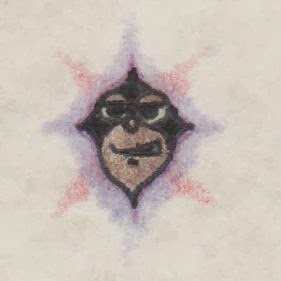 (kind of like Secret Service gnomes or NSA monitoring elves - When You Can't See Them, That's When You Know They're There!)
Posted by 4of7 at 10:10 PM