Update: IMAO Link of the Day: Cookie Palace and Staircase.
I was all set to draw another episode of Kevin Koastie this weekend. I had my paper and clipboard in place; pencils, pens and erasers on standby, when my brain took an unexpected trip into unexplored territory. See, I saw this optical illusion poster,
and I thought to myself, "heck, I could probably do that! I wonder what it would look like in color?"
So, no Kevin Koastie, sorry! In it's place I got this instead. (unfinished). It's a sort of a prototype. If  I can smooth out a few problems, I might be able to use this pattern in lots of ways. My imagination is all a-flutter!
But hey! With another 7 days to think about the next episode, it'll probably be the bestest ever, right? Besides, the penguin made me do it!

Oh, by the way...
New Stuff for sale on eBay! (Sold 3 so far, yay!) If you want to buy anything I've posted here, and if It's not already sold, given away or misplaced, I'll put it up on eBay for you. Show me da Money!
Little Worlds of Don Scholand - eBay listings.

Now, where was I? Oh yeah, here's the work I completed in March, 2014, plus another unfinished one down at the bottom.
This one is a refinement of a design I did in February,
Anyway, by changing the way I drew the corners and the intersections, I created another labyrinth (in true green). All the other colors I selected were demoted to support status after the green found the 'sweet spot'. Still, it took 184 color changes to finish the design, although technically, I only used True Green twice.
I finally got this design right after doing 3 less-than-perfect versions in February. It's only perfect in the sense that I didn't make any accidental deviations from the design I intended to draw, but it was still a big deal for me. (For about 5 minutes - then I noticed that I'd misspelled the word "Intelligent" in the title!) D'oh!
Will this one do, Anonymiss? I could make one that was cookie-er, or palace-ier, but I reckon this was the best compromise between a cookie and a palace that I could do. (so far).
PS: Have a Musey!
Then for the next few weeks I obsessed with variations on that light bulb made of lightning bolts idea I used to create the Musey.
These last four are all related in design, with differences in the details. This last one, Easter Basket, reminded me that I once promised Anonymiss a post featuring egg-shaped designs. So that will be next weeks post - The "Idea" of Eggs (and other Easter-y designs). with Kevin Koastie, unless I get distracted again.
Oh, and the very last one is a work-in-progress connected to a kinda-sorta challenge issued by Harvey at IMAO: Hey 4of7, Build Me a Staircase! So I'm working on a design I'll call Endless Stairs.
It ain't as elegant as M.C. Escher's "Stairs", 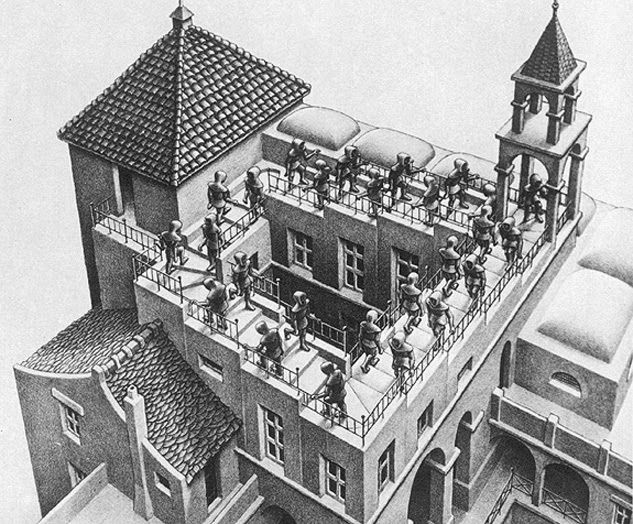 but I found a variation on the same perspective trick that I could use.